How to migrate vSphere Management vmk ports from a ghosted dvSwitch

Up until this point my mistake was still not apparent to me.   I was able to add the host to the new vCenter without issue.  However,  when I went into the vSphere Client to view the host's network configuration I noticed something odd:  no vSwitches!   I clicked on the vSphere Distributed Switch button (below image) and saw that the host still was referencing the DWsitch1 dvSwitch.   I thought, OK not a problem I could still use the Manage Physical Adapters link to migrate a vmnic to a local vSwitch right?  Nope.  Since the DSwitch1 dvSwitch was recognized as a dvSwitch,  but not managed by the new vCenter,  I wasn't permitted to move either of its NICs to a local vSwitch. 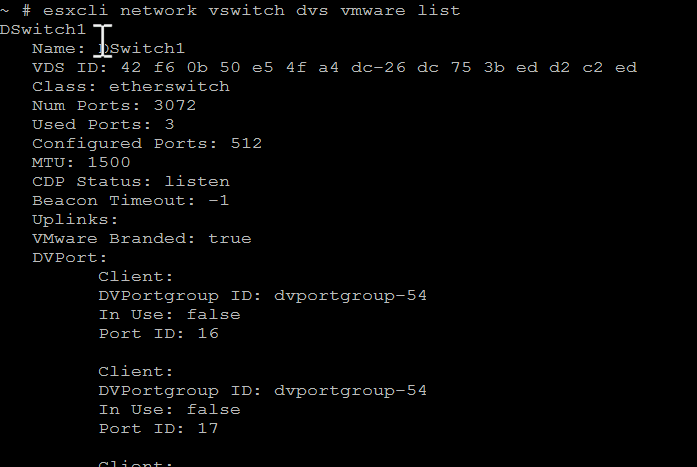 Now that I could see how the orphaned DSwitch1's configuration, I needed to figure out if there was a way to disassociate the vmnic's,  one at a time, from DSwitch1 so that I could add them to vSwitch0 without losing my management connection to the host.

I Googled on how to remove a vmnic from a dvSwitch and found this Vmware KB:
http://kb.vmware.com/selfservice/microsites/search.do?language=en_US&cmd=displayKC&externalId=1008127

I executed the following esxcfg-vswitch command to remove one of the redundant vmnics from DSwitch1:
esxcfg-vswitch -Q vmnic0 -V 16 DSwitch1
(NOTE: 16 is the Port ID gathered using the ESXCLI command)

Now that I had a vSwitch with a vmnic on it that contained the vSphere Management VLAN on it,  I still needed to migrate the vmkernel port to vSwitch0.   From Host -> Configuration -> Networking I clicked on vSphere Distributed Switch and then choose Manage Virtual Adapters.  I clicked on vmk0 and chose Migrate -> vSwitch0 and saved the changes.   Vmk0 migrated to vSwitch0 without any downtime.  To remove the 2nd physical NIC from the orphaned DSwitch1 I then executed:
esxcfg-vswitch -Q vmnic1 -V 17 DSwitch1

Once the 2nd NIC was removed I was able to add it to vSwitch0 for redundancy.