vGPU - Advanced Graphics in VDI with VMware and NVIDIA

What is vGPU?
GRID vGPU is a graphics acceleration technology from NVIDIA that enables a single GPU to be shared among multiple virtual desktops.  This technology allows graphics enabled applications to utilize direct video drivers, much like a vDGA model, with much higher compatibilities and enhanced performance than typically seen in a vSGA environment.  This is typically ideal for companies with graphics intensive use cases, such as engineering and healthcare, or even power users that require the use of heavy 2D and 3D graphics.


What are my other options? vSGA and vDGA
VMware's vSGA (Virtual Shared Graphics Acceleration) is shared graphics model that lets virtual desktops share GPUs so you can improve graphics while keeping density’s higher and maintain lower cost.  VMware’s vDGA (Virtual Dedicated Graphics Acceleration) is where the hypervisor passes the GPUs to the virtual machines directly.  The main advantage here is that the GPU is passed through to the guest, and they can use regular NVIDIA drivers within the virtual desktop.  This also includes compatibilities unavailable in the vSGA model such as all versions of DirectX and all version of OpenGL.

Why vGPU?
You may be asking why wouldn’t I always go with a vDGA model, the downside to vDGA is that it is costly.  In a real world scenario, NVIDIA’s K1 and K2 cards only have four and two GPUs each, or four or two virtual desktops per card when using vDGA.  This is where vGPU fills the gap between vSGA and vDGA.  The cost per desktop is exponentially increased when moving towards a vDGA model, and in many cases making vDGA cost prohibitive for an abundance of reasons.  While moving in the other direction vSGA is much more budget friendly but often falls short in performance, vGPU fills this gap and fills the void between high graphics performance VDI desktops and lower cost.


For your reference the matrix for both the K1 and K2 GRID cards is below.  As you can see, depending on the profile selected density is greatly increased for high performing graphics desktops in a vGPU environment. 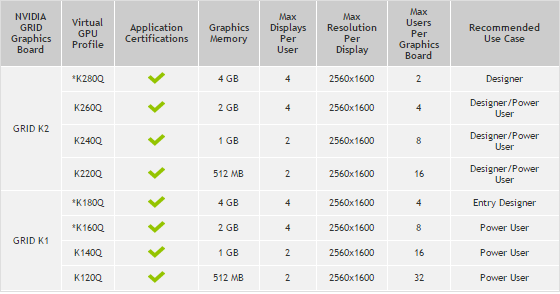 With the release of VMware vSphere 6.0 and VMware Horizon 6.1 vGPU is now here for VMware datacenters.  In addition, GRID compatible servers are required, for example here is the HP server datasheet.


In summary, vGPU brings hardware-accelerated graphics to VDI environments in a way that is much more cost effective.  In turn allowing companies to implement a VDI solution that is much more scalable, and economical, while at the same time still delivering a graphic rich user experience.